The port will be called on 14 times for the project, handling about 560 wind tower segments in total.

Wind energy components are breezing through ports across the Great Lakes this shipping season.

The trend is benefiting the Port of Monroe, which is in the midst of handling one of its largest cargo endeavors.

A partnership between the port, Monroe-based Ventower Industries — a company that specializes in fabricating wind turbine towers — and Spliethoff Group’s BigLift Shipping is supporting General Electric’s wind energy efforts in the state.

Every eight days, the port handles a shipment of forty wind tower segments, according to Port Director Paul LaMarre III.

“The port has come a long way,” LaMarre said. “We have become a congregation and distribution hub for wind tower segments … It is the largest project in our history.”

The shipments, which take off from Becancour, Quebec, traverse the St. Lawrence Sea, the 2,300-mile marine highway that connects the Atlantic Ocean to the Great Lakes. They are being handled by the M/V Happy River, a BigLift ship.

The port will be called on 14 times for the project, handling about 560 wind tower segments in total.

General Electric has a partnership with Ventower, which has produced several wind energy components for the company, according to LaMarre. Ventower has long used the port to move its products, he added.

That relationship drew the attention of General Electric, which saw the port’s logistics capabilities as advantageous, LaMarre said.

“At a time when other great lakes port are struggling to find any cargo, the relationships and business the port has built will ultimately provide to our sustainability,” he said.

The project is particularly important to the port due to a slow start to the shipping season, which usually begins in March.

COVID-19 had an impact on the port, LaMarre said, adding that cargo was scarce during the early days of the pandemic.

Limestone and coal account for a large part of the port’s business. There was less of a demand for the two as heavy industry and businesses were closed or restricted in an effort to slow the spread of the virus.

DTE Energy’s Monroe Power Plant also was impacted, LaMarre said. The utility generates a lot of business for the port, he added.

“When industry is nonoperational, little electricity is being used,” LaMarre said. “Humanity by itself doesn’t place place as much demand on the electrical grid as heavy industry does.”

For the first two months of the season, the port had no cargo to handle. It started receiving shipments in early May and coal shipments to the power plant have returned to a near-weekly basis, according to LaMarre.

The size and weight of the wind tower segments will help keep the port on track to beat its tonnage from last season, LaMarre said. Last month the port received a Pacesetter Award, which is given to ports that annually increase their handling of international shipping tonnage.

The pandemic also has changed operations at the port, which is taking extra precautions, LaMarre said. No COVID cases have been reported to the agency, he added.

All workers wear masks when on the dock. Port workers also stay on the dock when handling cargo while workers on vessels remain on their ships.

“It’s been challenging, to say the least,” LaMarre said. ”… we continue to count our blessings every day. Without this project this year, we would be facing significant challenges.” 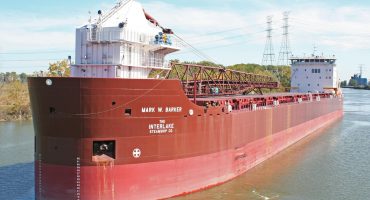 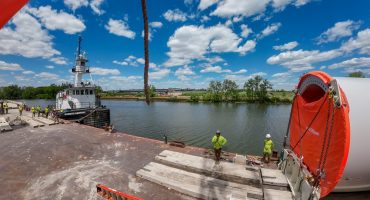